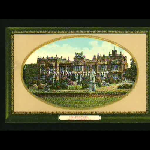 Contains video interviews with former workers on the estate. Also contains images relating to Burton Constable Hall and life on the estate, shown to accompany the oral histories of the workers. Duration: 42 mins Timing Action on Film (02:04) Jasmine and Arthur Myers, who worked as housekeeper and driver. Jasmine lived at Tower House when her father was gamekeeper. Still photograph of the father and an aerial view of Tower House. (02:57) Mary Harrison (nee David), was a parlour maid and describes how she first came to Burton Constable and of riding there each day on her bicycle. (03:42) Clara Draper, a housemaid, describes her hours of work and her pay. Still photograph of people in a pony and trap in front of some houses. ( Also at 26:56) (04:14) Chichester Constable describes the work of the maids and kitchen maids. We see a still photograph of the cook with two maids, (also at 06:04) and the butler and some maids (also at 07:18). (04:58) Mary David describes the maids' accommodation. Still shots of empty servants' rooms and staircases. (06:04) Chichester Constable tells us that the woman pictured in overalls is "The famous Annie Coles, the cook." (06:19) Clara Draper lists the different inside and outside staff. (06:38) Photograph of the Butler. Chichester Constable describes his duties. (07:23) Chichester Constable tells of the "green baize door" to the servants' quarters. We see a picture of Annie Coles out of uniform. (08:04 ) Chichester Constable describes Shula the nanny. Picture of Shula wearing a white cap. (08:34) Ann Augustus, granddaughter of Gilbert Francis Fletcher, who was the estate manager and Francis Fletcher, who was the housekeeper. She also describes other servants who worked there in her parents' time. (09:41) Chichester Constable reads from the 1752 housekeeping accounts. He goes on to describe taking ice from a frozen lake for the Ice House, and making ice cream. (11:33) Description of beer being made and stored in the cellar for the staff. We see a picture of an old notice ordering staff not hang around the cellar entrance. (11:57) Jasmine and Arthur Myers describe their difficulties re-covering a kissing chair and a bed canopy. Pictures of both pieces of furniture. (12:32) Arthur Myers describes his father Samuel Bentham Myers, a haulage contractor at Burton Constable Hall. (13:24) Chichester Constable describes the annual coal delivery. We see a picture of the Red Drawing Room with a large fireplace. (13:43) Clara Draper tells of a trick the maids played to frighten the cook. (15:28) Jasmine Myers describes unexplained cold drafts and footsteps experienced in the gallery and on the stairs. Pictures of both these places. (16:37) Doreen, a visitors' guide, describes seeing a ghost near the French Landing. (17:06) Ron Creasy describes working in a around Sproatley after being evacuated there in May 1941. His wife Nancy was a ladies maid at Woodhall. (19:20) Chichester Constable once found an 18th century receipt for a farm worker. He describes their salary (£6 for six months) and their accommodation. (20:11) Ron Creasy describes feeding sheep and other animals on the estate. Pictures of shire horses and wagon, Ron with a pony and cart, and Hundred Acre with horses standing in front of it. (24:52) Harry Buck was born at Pasture House Sproatley and worked on local farms. Pictures of him at work. He tells how Burton Constable Hall was used to store monkey nuts and printing paper during the Second World War. (26:10) Harry Buck describes bomb damage to the Hall and the surrounding area in the Second World War. (28:24) In 1934 Queen Mary and Princess Mary visited Burton Constable.Hall. (Picture of their visit.) The day after, the Colonel and Mrs Constable opened the Hall for local people. Doreen Harper describes her life and work as a tenant on the estate. (29:53) Description of workhorses used around the estate and of how Hull timber merchants would purchase timber from the estate. Pictures relating to this. (31:17) Harry Ray was the estate bricklayer from 1930s to 1950s. His wife Hilda was the village dressmaker. Their daughter Mary O'Donnell describes them and we see pictures of Harry at work. (32:21) Pictures and a description of the local fox hunt. (Also at 41:36) (33:27) George Fox describes how he was hired at Hull Trinity Side to manage shire horses. Pictures of George with other workers and teams of horses. (34:56) Mary Wilson describes her grandfather John Ledley Fox, the gamekeeper. We see a painting of him, and she describes his work, and how he once attacked a gang of poachers. (36:25) Mary [Hotchkin] and Barbara [Carroll] describe their father Herbert Henry Walton, who was head keeper at the Burton Constable Estate 1915-1965, as was his father before him. We see a picture of him, one of the Keeper's House and other pictures of the family. (40:49) Chichester Constable describes George Graham, the gardener in about 1930. The groom was called Jackson. We see a picture of Chichester Constable as a small child, standing between them. (41:21) Chichester Constable describes the importance of status amongst the servants and how for instance the head groom had a special set of buttons with a crest on them. Public access copy available on Preservica: https://eastriding.access.preservica.com/ (Search 'DDCC/156/1')