Admin History: Changing Horizons is a compilation of stories of coastal erosion and the fishing industry on the Holderness coast. It draws on interviews with local residents. The project was funded by the Coast, Wolds, Wetlands and Waterways LEADER programme after it was commissioned by East Riding of Yorkshire Council and the Changing Horizons Steering Group. The film was produced by Film Bee, and interviews were conducted by Peter RALi Studios and Film Bee. 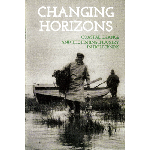 Originally deposited as a DVD-ROM. Timing. Action on film: (00:22) Over close-ups of the crumbling Holderness coastline, local residents describe what it is like to live nearby. Their statements are accompanied by historic and current film and photographs. (01:04) Brian Williams explains how Holderness is being consumed by the sea. He describes the geological reasons for this. (03:32) A local fisherman describes his career. (05:39) Joe Gelsthorpe explains how lobsters were 'seeded' off the coast during the 1970s. (06:05) People talk about the Floral Hall at Hornsea while sitting in the cafe there. They describe the holiday season when Hornsea was a popular destination. (08:11) Some teenagers explain why they like meeting on Hornsea beach. (09:07) A local government official discusses coastal erosion. (11:20) Joe Gelsthorpe talks about the traditional coble fishing boats. (12:28) Berna Moody, who is from a fishing family, recounts the superstitions and family culture of the fisher folk. (14:30) Two older ladies describe the area near their home on the cliff top. (14:41) A man who was born in 1947 remembers the campsites and holidays in 1950s Aldbrough. (17:04) An older lady describes living near the eroding coastline. (18:44) Kathy Bartle, who has lived near the coast for 27 years, tells of being able to feel the vibrations of the sea hitting the cliffs. (19:20) The previous lady describes some of the buildings which have been lost to the sea. (21:02) Kathy Bartle explains about the lack of coastal protection where she lives. (23:20) A group of fishermen describe their work and how it is affected by coastal erosion. (25:02) Peter Lusmore, a farmer, tells us how he has lost some of his fields to coastal erosion. He describes the dangers of farming above the cliffs and mentions some military installations. (26:33) Jack and Hilary Piggott recount their experiences during the 1953 floods at Easington. (27:37) Peter Lusmore describes the popularity of the local holiday resorts after the Second World War. (27:55) Hilary Piggott reminisces about her father's refreshment hut. (28:08) Peter Lusmore remembers some early attempts to build sea defences with tyres, hedge cuttings or scrapped cars. (29:08) Andrew Gibson, who works at Spurn Point for the Yorkshire Wildlife Trust explains that the Holderness Coast is all about movement. He points out the advantages as well as the problems, and puts everything into an historical context. Public access copy available on Preservica: https://eastriding.access.preservica.com/ (Search 'DDX1955/1')