Admin History: Ray Rands was born on 8 July 1930 at North Wold Farm near Barton upon Humber, North Lincolnshire. Although he spent his childhood in North Lincolnshire, Mr Rands later settled in the Holderness area of East Yorkshire where he worked as a farmer. He became a keen cyclist around 1980 and participated in a number of charity bike rides. His longest ride in a single day was 98 miles. Mr Rands continues to enjoy retirement in the Holderness area. 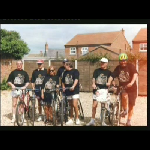