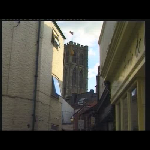 Made by Howden Civic Society and Howden Junior School children, it relates to the blue plaques which mark 10 'Places of Interest' in Howden. Duration: 28 mins Timing. Action on film: (00:12) Councillor Gordon Gass talks about Howden and the Howden Town Trail, with blue plaques on some of the buildings of interest. (01:45) The Town Mural in the Market Place records the development of the town, from the building of the Minster to the design of the airships which were built nearby. (01:58) Little has changed in the layout of the medieval streets which open out to wider Georgian streets. (02:27) Discussion about proposals by Howden Civic Society to install the plaques. (02:47) Howden Junior School pupils start finding out about their town, looking at and recording some key buildings. Back at school the children create displays using new technology, such as computers and digital cameras, as well as writing essays and doing drawings and paintings. (03:26) Mrs J M Scargill, headteacher at Howden Junior School, discusses how Year 5 pupils have been researching the 10 places of interest. (04:17) Some schoolchildren explain about their project on 5 Market Place. This shop has been a butchers since 1867 and was previously a grocers and a candle makers. During the 1930s depression Mrs Moore, the owner's wife, ran a soup kitchen twice a week using spare bones and vegetables donated by other shopkeepers. (04:52) Roger Watkins, the project co-ordinator, makes a speech and then Philip Parkin, who is representing his father the owner, unveils the 'Blue Plaque'. (06:02) A close-up view of the information on the plaque. (06:08) The Bishop's Palace where Roger Watkins introduces retired clergyman Peter Webster. (06:58) Peter talks about King Edward II and Henry V, then he unveils the plaque. (08:04) A close-up of the plaque, which explains that the palace belonged to the Bishops of Durham and was visited by King John, Edward II and Henry V. (08:08) The children, back at school, film each other as they describe their work on the Bishop's Manor project. (09:31) The camera scans some architectural features of the Bishop's Palace. (10:23) The White Horse Inn is described by some schoolchildren. The inn existed as early as 1702 and the yard was a collecting point for many villages. In 1773 it was purchased by the Carter family who owned several local inns and breweries by the nineteenth century. (10:58) A close-up of the blue plaque on the White Horse Inn. (11:05) A group of schoolchildren talk about their project on Howden Hall. Miss [Whisker], their teacher, used a digital camera on their visit there. (11:33) The pictures taken include the signature of Esther Worsop, which is scratched on the window glass in the Morning Room. (11:41) Mr P White, who lives at the Hall, explains how Miss Worsop used her diamond engagement ring to scratch her name on the window in 1841. (12:29) Mr and Mrs White's bedroom where Mrs White made the beautiful soft furnishings. (12:59) The children are shown around Howden Hall including features such as the art nouveau wall painting, ['Delft'] tiles around the fireplace and an ornate pelmet. (15:10) A young girl speaks about the Wellington Hotel project, known in the eighteenth century as the White Hart Inn. The inn was a stopping point for coaches travelling between Liverpool and Hull. Cockfighting took place here in the early nineteenth century. It was renamed in honour of Lord Wellington in the 1820s. (16:14) A close-up view of the information on the plaque attached to the Wellington Hotel. (16:28) Four children tell us about their project on the Shire Hall. (16:41) Mrs J Harrison unveils the plaque at the Hall. (17:08) A close-up view of the plaque. (17:09) A Junior School girl talks about the building. The foundation stone for the Shire Hall was laid in July 1871 and the work was completed in October 1872. The architects were Hadfield and Sons of Sheffield. In 1942 the Hall passed from private ownership and was bequeathed to the people of Howden. A public trust was set up to administer the building. (19:56) Two girls talk about their group project on the Old Police Station, which was built in 1843 as a superintendent's house with cells. It was designed by Henry Lockwood who erected similar buildings in Driffield, Market Weighton and Hull (Trinity House). (20:25) A view of someone attaching the blue plaque to the Old Police Station with a close-up of the plaque. (20:52) A group of children explain their projects on Bowman's Hotel. This was originally called the Nag's Head and then renamed the Bowman's Hotel when John Bowman became the owner in 1851. (21:51) Nigel Peters, the landlord of the Bowman's Hotel, unveils the plaque on the building. (23:07) Some children talk about their project on Parson Lane House. (23:28) Councillor Jon Neal stands outside the house and describes its history, it was a school run by the Misses Blackburn until 1962. The largely Georgian House was re-fronted with grey yellow bricks in the early 1800s. It has distinctive doorcase mouldings. (24:01) Councillor Neal unveils the plaque and a close-up view of its information is shown. (25:43) Four boys describe their project on Bridgewater House. (27:02) A close-up view of the blue plaque on the house is shown. This explains that the house was built using bricks laid in Flemish Bond formation and dates from the mid 18th century. It was probably built by Thomas Graver, an apothecary and surgeon. It later became the home of the Spofforth family, some of whom emigrated to Australia, where Frederick Spofforth was well known in early test cricket. (27:09) Mrs Scargill speaks of how pleased everyone is with the work that her school has done on these projects. She thanks the Howden Civic Society. (27:27) Mrs AWhite unveils the plaque on Howden Hall and a summary is given of some plaques already mentioned. The people who have been involved with the project talk about how it will benefit Howden. Public access copy available on Preservica: https://eastriding.access.preservica.com/ (Search 'DDX1220/6/7')